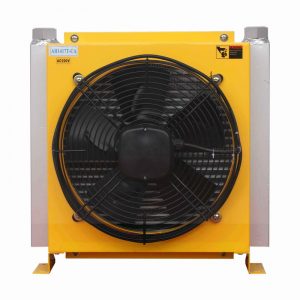 Air oil coolers are equipments used in order to cool gear drives, fluid power systems, hydraulic presses and torque converters among others. It uses the air cooling method for dissipating heat. With this method, the surface area or the increasing air flow of the object that’s being cooled is expanded. In order to remove the heat, the air around the object or the surface of the object itself is being cooled.

Applications and Advantages of Air Oil Coolers or Hydraulic Coolers

Air cooling is applied in electronics, vehicles, turbines and other industry processes either directly or indirectly.  Air oil coolers as well as hydraulic coolers are important construction machineries that are used in diverse applications. With their capability of removing excess heat, they can prevent hydraulic systems and from getting damaged due to extreme heat.

This makes coolers important for maintaining cost – effective operation as they are capable of providing a number of benefits in performance, economy and environment. These benefits include the capability to maintain the oil’s correct temperature, making sure the mechanical components are lubricated properly and that the hydraulic device is running at its maximum efficiency.

By keeping the temperature down, it is also able to help in keeping the oil and the machine components to last longer. The fact is excess heat degrades hydraulic oil, can form varnishes that harm the component surfaces and also quicken the deterioration of elastomeric and rubber seals. These are only some of the benefits of an air oil coolers or hydraulic coolers making them really important in the construction machinery industry.

Air Oil Cooler Accidents – Why and How to Prevent it

Surely you have heard about accidents involving air oil coolers, right? Accidents normally happen but that doesn’t mean that there’s no way for you to avoid it. In the case of air oil coolers, you can avoid accidents by being aware of the warning signs that your air cooler has finally had enough. That’s right, like everything else even air coolers has its limit and being able to see when your air oil cooler reached its limit, that’s how you will be able to prevent accidents.

Another that might be the reason of air oil cooler accident is the operation, that is, if it has not been properly used. One of the un-repairable damage to air oil cooler that can just be the cause of an accident is over pressurization which could be caused by proper use of the cooler. If you operate the engine when it’s under cold climate conditions without having pre-heated the engine and the cooler first, it will end up to over pressurization and possibly to accident.

Improper cleaning can also lead to damages to the air cooler and then to accidents. If you have not properly cleaned and maintained the cooler, it could result to corrosion, rust and other small damages that when accumulated could result to something more serious. This makes it extremely important that you can take time of properly maintaining the air oil cooler. Just like in any other machine or device, regular maintenance gives it longer time table. At the same time, it allows you to check if there’s any possible problem before it becomes too late.

There is also a possibility of oxygen explosion with air oil coolers. There are certain types of air oil coolers equipped with an integral thermostatic valve for controlling the oil. This is labeled with IN and OUT which indicates the direction the oil flows through. If the line connections of the oil are reversed it can lead to burst instantly upon engine start-up. This could also be problem caused by improper operation which may lead to dangerous oxygen explosion.

These are the most common damages to air oil coolers that could be reason behind air oil cooler accidents. By knowing these, you can have a way of preventing accidents to happen and ensure that your air oil cooler will work for much longer time.

Why select a hydraulic oil cooler?

As a means of power diffusion, hydraulics has many benefits. But overall efficiency is NOT one of them. A single-reduction gearbox has an efficacy of 98 to 99 percent, double-reduction 96 to 97 percent and triple-reduction 95 percent. A chain drive in well-being has [...]

Arrangement and selection of loader radiator

Why oil cooler is needed for hydraulic system?

Hydraulic oil flows out of the tank into the hydraulic working system, then passes through the return line and finally returns to the tank, and the oil temperature rises during the work. In order to prevent the oil temperature becoming too high and made [...]

26/12/2018meta-author By chance-coolers 未分类 Comments Off on Why oil cooler is needed for hydraulic system?

Why Use an Aluminum Air Heat Exchanger?

Why Use an Aluminum Air Heat Exchanger? Air Oil Heat Exchanger There are many different types of heat exchangers used for various industrial and commercial purposes. A heat exchanger is a piece of equipment or a device that is used to transfer or exchange heat between [...]

20/09/2018meta-author By chance-coolers 未分类 Comments Off on Why Use an Aluminum Air Heat Exchanger?

Installation of Hydraulic Oil Coolers Are you looking for suitable coolers for quenching and lubricating oils and heat transfer fluids? Hydraulic Oil Coolers is the answer for your needs. They are known to be ideally used to a spectrum range of manufacturing, agricultural, industrial and [...]

Why hydraulic oil cooler is needed in hydraulic systems?

10/09/2018meta-author By chance-coolers 未分类 Comments Off on Why hydraulic oil cooler is needed in hydraulic systems?

Air Oil Heat Exchanger Working Principle An air oil heat exchanger is among the must-haves for every equipment. It’s a known fact that if a machine works hard for a long period, it can heat up easily and damage itself. In fact, in most cases, [...]

26/12/2018meta-author By chance-coolers 未分类 Comments Off on How an air oil heat exchanger working?